Marseillan Village - imagine yourself in a portside paradise

..our special star in the village centre... 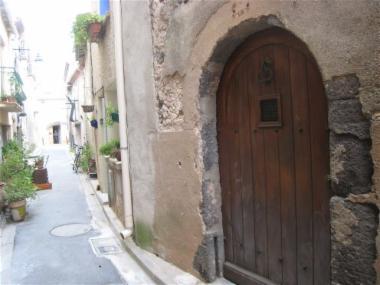 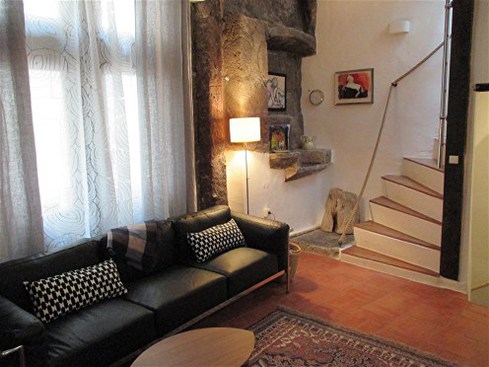 For years this house was Marseillan’s forgotten secret, completely hidden from view, curtained behind a wall of ivy, in one of the narrowest little ruelles of the historic centre. 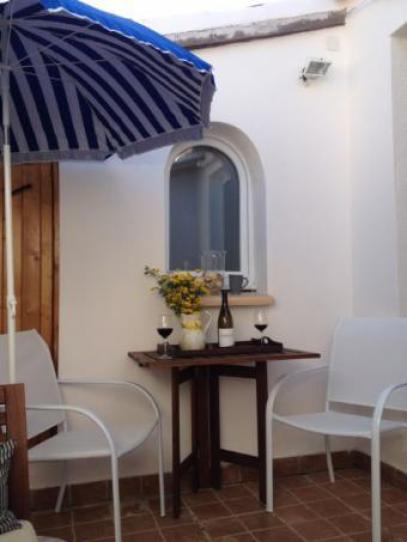 Then one day, just like in the fairy tale, decades of entwined and embracing greenery was cut away and behind the swathes of leaves and twisting branches emerged the sleeping beauty of the rue Michelet.

Refreshed and revived, restored and loved once again, Estèla gradually reveals just some of her secrets, with many more stories still to be discovered, as the little house opens her big front doors to guests for the first time in generations.

The whole house has 3 bedrooms, 3 bathrooms and a roof terrace, sitting rooms, kitchens on each of the 3 floors ... and a rooftop den.

You may choose to stay in the main house, or opt for a 2 bedroom duplex terrace apartment, or simply stay downstairs, which is available for rent as an independent one-bedroom studio.

A hideaway for couples, a base for a group of friends, Estèla is as versatile as you would expect from a little local legend. (scroll down the page for the story)

From the street, open the grand traditional door set in a wall of centuries-old volcanic stone, and step across the threshold. 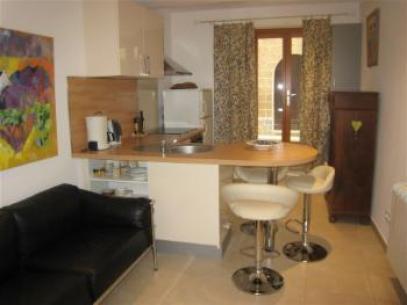 On the ground floor is the self-contained apartment (see below) that may also be enjoyed as part of the main house – perfect “granny annexe” or private quarters for those who may find the steep winding stairs of an old village house a bit too much of a challenge.

The apartment has its own front door on a neighbouring street if it is being rented separately to the main house.

But here is a delightful little sitting room with comfy sofa and very well equipped kitchenette with everything you need – even a dishwasher – and breakfast bar. The bedroom area also has access to its own smart modern shower room and ensuite facilities.

Up the main staircase to the first floor of the house ... 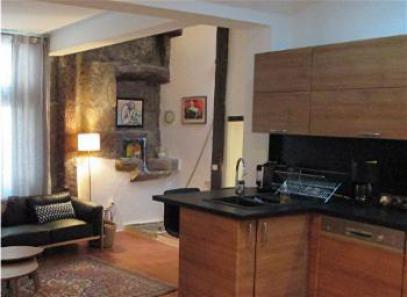 Here, with morning light streaming through the striking renaissance windows, is a comfortable lounge, with sofa and chairs clustered around a fine fireplace.

In a corner by the stairs is an original basalt stone sink, part of the very structure of the building and dating back through the centuries.

Today, this provides superb focal point for some eye-catching and original artwork.

The walls throughout the house are hung with vibrant, colourful, sometimes quirky paintings, very much a trademark of this house, the expressive images at once thought-provoking and life-affirming. 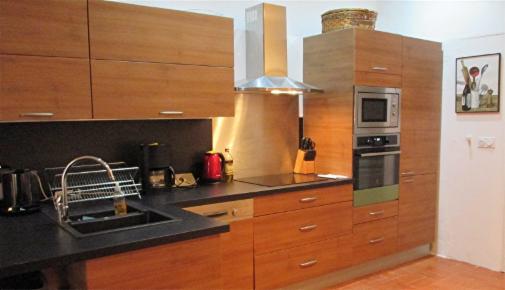 A step up to the kitchen and dining area – splendid modern kitchen, with built in appliances. Here is a dishwasher, ceramic hob, fitted higher-level oven and microwave, fridge, freezer, coffee machine, kettle and all the pots and pans and crockery and cutlery you need to entertain family and friends. 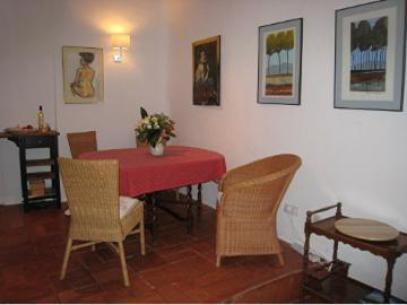 The dining table in the corner is perfect for lazy evenings at home, with fresh produce from the fruiterers, fishmongers, bakers and winemakers who set up shop and stalls in the neighbouring streets, just down the rue Emile Zola.

And don't worry if you prefer to dine with friends in the studio downstairs or breakfast on the rooftop terrace, no need to keep running up and down stairs, since each floor of the house has its own fridge and cooking facilities. 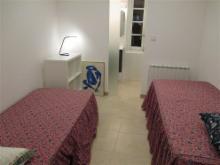 Beyond the kitchen is the twin bedroom, with two single beds and its own ensuite shower room with wc. 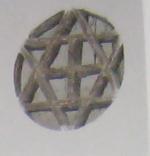 separated from the sleeping area by sliding doors.

As you leave the first floor, glance upwards and you will see the intriguing carved star that gives the house its name presents a glimpse of the staircase leading to the top floor.
Here everything spans out from the den. A master bedroom with another modern and stylish ensuite shower room/wc. The modern sink and shower works well with the period details on the old windows and handles. 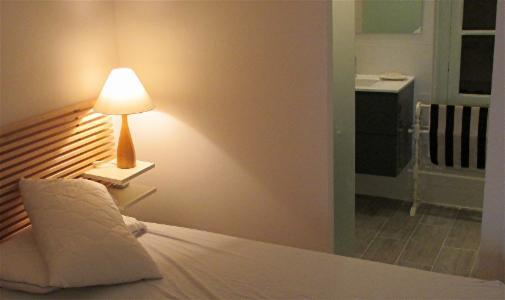 The den doubles as a study – with a desk in the corner for catching up on your emails and updating your Facebook status to Life is Beautiful.
A great room for settling down with a book or catching up with the news or a film on TV. 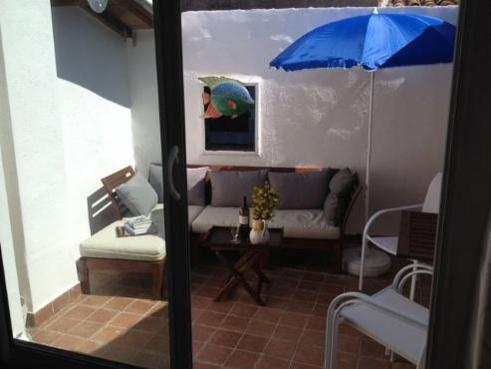 And french windows open out to the roof terrace, where you may enjoy breakfast or an aperitif completely hidden from the street below. 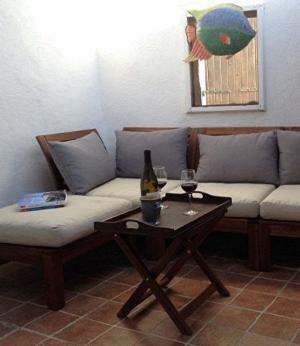 No need to worry about the heat if the midday sun, for as well as the parasol, a proper sail can be hoisted over the terrace to create a delightful abris summer shelter.

And no need to nip downstairs for that chilled bottle of Picpoul de Pinet or platter of fresh oysters, since just off the terrace is a mini-kitchenette with its own fridge, a 2-ring ceramic hob and sink for preparing food and drinks just a couple of steps from the terrace itself.

There is wifi throughout the house and in both apartments and access to washing machines.
Le studio

The self-contained apartment on the ground floor of Estèla has two front doors: one opens to the entrance hall of the main house - ideal when you are using the entire building. 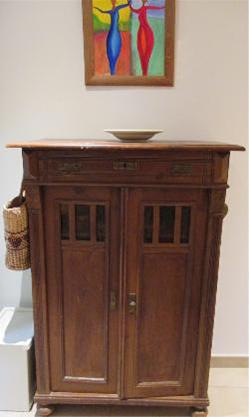 However, if you decide to choose this studio as your own secret pied à terre and Languedoc hideaway for two, then use the appartment's own independent street entrance in a tiny little street behind the main house.

Here you will find a very well equipped kitchen - even a dishwasher of your own, a stylish breakfast bar for coffee and croissants à deux in the morning.

A comfy sofa in the living area and there is a delightful double bedroom, with plenty of wardrobe space and a smart modern shower room.

Guests can enoy great wifi thoughout the apartment as well as TV.

Just like the main living and bedrooms upstairs, the apartment is colourfully decorated with a delightful selection of vibrant and original artworks in every room.

more photos towards the top of the page 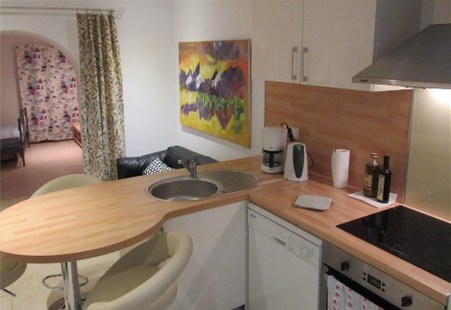 Email us for details of our latest prices in Euros 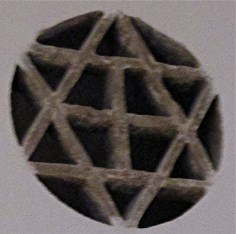 Some say that this is the oldest house in Marseillan, others recall stories of it once being a spiritual sanctuary a few steps from the old walls and hidden behind the market place.

The name Estèla is the Occitan word for star – and the name implies more than the Mediterranean night sky to be enjoyed whilst sipping a digestif on the hidden terrace at the top of the house.
The house was once a sanctuary, perhaps home to one of the many confrèries, religious orders that were once dotted around the village. 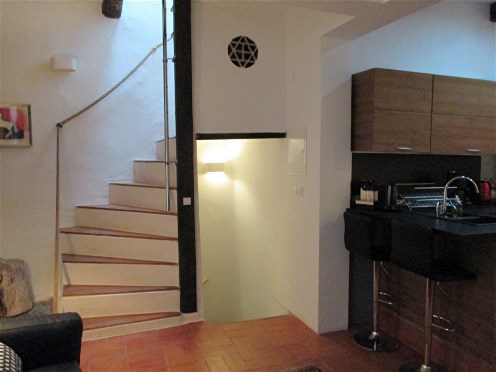 In Marseillan, wealthy merchants would pay penitent friars to pray for their souls in tiny chapels tucked away in the warren of winding streets.

In this oldest of houses, with its striking renaissance windows, religious symbols were discovered in the walls of black and grey volcanic stone during recent renovations.

A complex star symbol, resembling the traditional Star of David, yet also evoking earlier pagan signs was uncovered during the restoration of a wall by the first floor staircase.

Some historians believe that this might have been an emblem of one of the long forgotten holy orders. Religious icons may be seen carved into the outside walls of many old houses in Marseillan, from statues of saints to the cockle-shell badge of the pilgrim route to Santiago di Compostella in Spain. 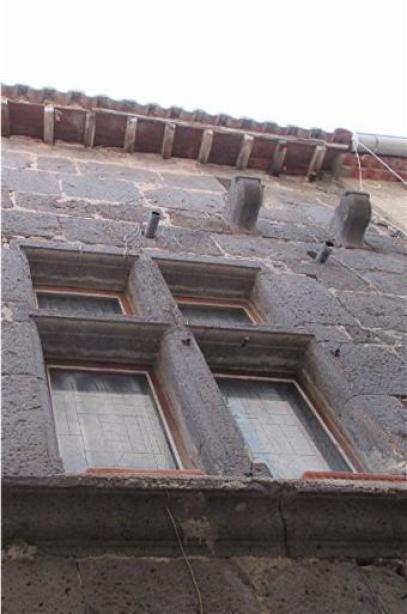 Others suggest that the house in rue Michelet might have been sanctuary for Jewish silversmiths escaping the Spanish Inquisition in 1492.

Many families crossed the Pyrenees from Spain the very year that Columbus set sail to discover America, and discovered in their turn a new life in Pezenas and Marseillan.

For centuries, Languedoc was a crossroads of interfaith cultures, with some Jewish ghettos under the protection of the French popes, and combined Islamic and Jewish study centres in Montpellier. Marseillan was governed by bishops, yet home to merchants and traders. And the port brought visitors from diverse cutures to the village. 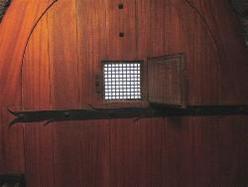 To this day, the rue Michelet remains a delightful melting pot and a true community.A ruelle, just wide enough to cycle between the rue Vedel and the rue Emile Zola, with its patisserie and enticing food shops,

Benjy the terrier keeps an eye on comings and goings, as neighbours greet each other, share a glass of wine or pastis, or water their overflowing tubs of geraniums and Mediterranean herbs.
Just a couple of hundred yards away, the place Carnot has its grocers and bakeries, restaurants from the gastronomic to the hearty and homely, all huddles around the Hotel de Ville. And all is still just another five minutes walk down to the port with many more restaurants and cafes.

Scroll down the page for more photos 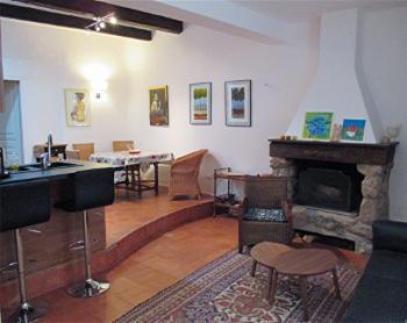 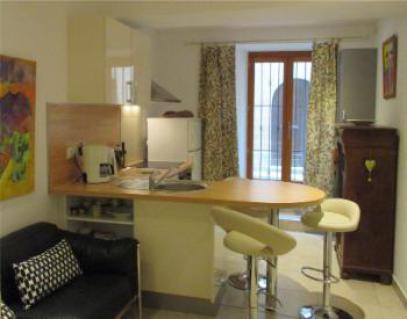 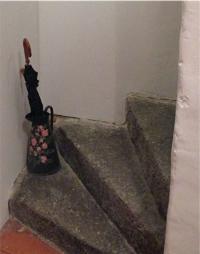 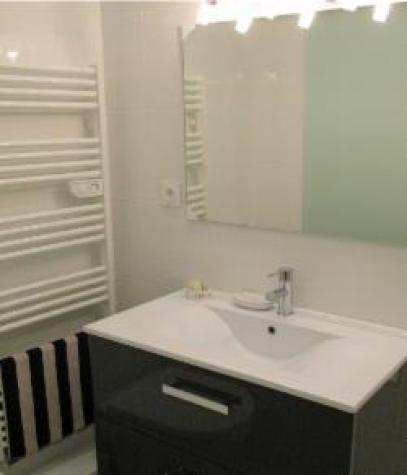 to book your stay at Estela:

Type and chat with us live via Skype. Click the button below