Marseillan Village - imagine yourself in a portside paradise

WITH BREXIT & COVID prompting us to look again at alternative routes to Marseillan, we've plenty of suggestions to help you plan your holiday.

Marseillan Village is located on the banks of the Etang de Thau, the  Mediterranean lagoon on the coast of Languedoc-Roussillon, known to the ancient Greeks and to generations of pirates and privateers.

Between the lagoon and the Med is a 12 kilometre stretch of sandy beach linking the resorts of Sète and Marseillan Plage.

With its special microclimate, and boasting 300 days of sunshine each year, Marseillan is protected by the twin headlands of Cap d'Agde and the Mont St Clair and the summer heat is cooled by breezes from the foothills of the Massif Central.

SIX local airports serve Marseillan, with direct flights from almost two dozen UK and Irish Airports. And three more airports offer alternative rutes. Closest and best is the misleadlingly named Beziers Cap d'Agde airport at the nearby vilage of Vias, only 12 minutes from Marseillan. Flights from UK (Bristol, Edinburgh, Manchester, Stansted and Luton + connecting flights from other towns) as well as from Germany and Sandinavia. With bus shuttle transfers from one euro per person.

As airlines re-think and re-publish their flight schedules in the coming weeks, come back soon for listings of direct flights from UK and Irish airports and tips on many more international connections.

The combination of Eurostar and France's high-speed TGV rail network mean that you can pick up the train in London or Kent, change in Lille or Paris, and be in Languedoc in around six hours. Return fares begin at around £100 standard class and £179 Standard Premier class (which includes meals and drinks aboard Eurostar) - even in peak summer season. Travel to Montpellier to pick up a hire car, or continue to Agde, just 10 minutes from the house.

Eurostar have a direct service to Avignon - central London to Provence in around 5 and a half hours, from £45 one-way.

Eurotunnel (www.eurotunnel.com) the channel tunnel route from Folkestone to Calais. Lowest prices are overnight from 10pm-6am. Our tip is to save your Tesco Clubcard vouchers £10 of voucher points are worth up to £30 off your crossing

P&O Ferries (www.poferries.com) The most daily crossings from Dover to Calais

DFDS (www.dfdsseaways.co.uk) Has two routes from Dover. Dover-Calais and Dover-Dunkerque (see below)

How to get to us without travelling via Calais 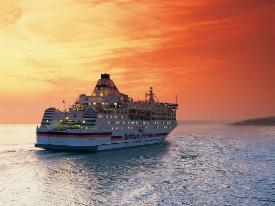 WHEN summer strikes bring a risk of delays at both the port and tunnel routes through Calais, there are 10 alternative Channel crossings to choose from. And most of them do not even involve travelling to Dover when the M20 is out of action.

Choose your route across the channel and you may even be able to drive down to us without having to go around Paris - an added bonus!

Travel via Normandy or Brittany

Five ports and six routes to France, with drive time to Marseillan from around 8½ hours. But remember to add time for stops, meal breaks etc, so budget at least another 1-2 hours before thinking about traffic jams and other delays.

If you really want to travel through Dover, you can still avoid Calais - but the Kent roads in the UK may still have queues if lorries are parked up on the M20

You may also avoid the French ports altogether by travelling via the Low Countries, although this will add considerably to your driving time on the Continent: 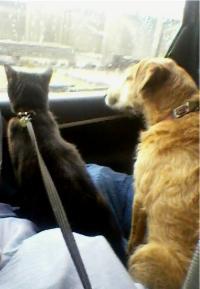 If travelling with pets - take the shortest crossing possible.

Of course, the Eurotunnel shuttle is the most pet-friendly route as you soend the 35 minute journey in your own car with your pets (see seasoned travellers Scrumpy and Holly, left). But if you planing an alternative route, think pet!

With the exception of just one Brittany Ferry "Economie" option on board the no-frills low-cost ferry Etretat to Le Havre, where you may travel with your pet in a special cabin (contact the company for details - see above) your cat or dog will have to wait alone in the car on the car deck for the duration of the crossing.

So consider the Dunkerque crossing with DFDS or the high speed Cherbourg route in summer if your pets will be coming to France with you.

From the Channel Ports - head to Paris. From the boulevard Périphérique follow signs for Clermont Ferrand, taking the A6, A10 and then the A71 motorway which becomes the toll-free A75 from Clermont Ferrand to Pezenas (the only charge on the A75 is for crossing the world's highest bridge, Norman Foster's amazing Millau Vidauct, €6.60 in summer, otherwise €4.90). From Pezenas/Agde exits, follow signs to Marseillan. 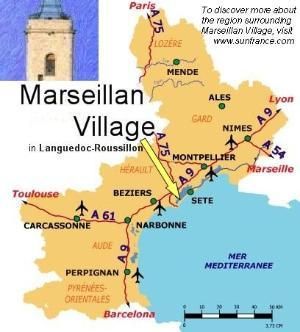 From Montpellier Airport - follow signs for the A9 motorway (direction Beziers Toulouse Barcelona) and stay on the motorway until exit 33 (Sète) and take the D613 towards and through Mèze. At a roundabout turn left onto to D51 to the centre of Marseillan. Motorway tolls around €2. For tolls and directions from other airports, drop us a line.

From Nîmes - A54 Motorway from the airport (direction Nimes) then join the A9 towards Montpellier and continue as above.

From Perpignan or Carcassonne - A9 Motorway (direction Montpellier) from Perpignan (from Carcassonne, you will be taking the A61 then A9), exiting A9 at exit 34 (Millau Clermont-Ferrand Pézenas Agde Vias). Then take the D13 towards Bessan, turning left from the main road onto the D28 which runs through the village of Bessan and bear left onto the avenue de Marseillan, a typically french tree-lined lane that crosses the river Herault then passes vineyards and continues for a good ten minutes entering Marseillan at a roundabout with a Renault dealership and Carrefour Market supermarket on your left.
From Beziers-Cap-d'Agde- Follow signs to AGDE CENTRE then, after crossing the river, look for the signpost to MARSEILLAN. Cross the railway track and kee going until you find the roundabout with a Renault dealership on your left.

As you enter Marseillan from MONTPELLIER (or NIMES) - the D51 veers left at the roundabout (onto the boulevard Pauline Buisson), bearing right to become boulevard Pasteur. Just after the Jardin de Naris restaurant, turn left at a predestrian crossing into the boulevard Jean Bertou, which becomes the rue Suffren at Chez Philippe restaurant. Head on towards the lagoon then turn left at the water and you'll find the Port Tabarka and the rue des Pecheurs.

Of course if you are coming the other way (FROM AGDE or BESSAN) ... enter Marseillan on the D51, along rue Victor Hugo and bd Lamartine. Bear left onto the boulevard Pasteur at the theatre roundabout, past the Ricard oyster counter, then take the first RIGHT into boulevard Jean Bertou and continue as above ...

We'll not be far away.

For help planning your itinerary and finding the best deals on flights, ferries and trains - email us at stephane@marseillanvillage.co.uk

For information about holidays in France, from the rules of the road to etiquette at Agde's naturist beach don't forget to visit the French Tourist Office website before you leave home. To keep an eye on what's going on in and around Marseillan surf before you fly:

For guaranteed lowest prices on car rental at the airports - even better than the airline's partner deals - and none of those nasty surcharges click here. You could also collect your car at Montpellier, Sete, Avignon and Beziers stations.

For information about holidays in France, from the rules of the road to etiquette at Agde's naturist beach don't forget to visit the French Tourist Office website before you leave home.

To keep an eye on what's going on in and around Marseillan surf before you fly: oome back soon to chec out our updated links

Type and chat with us live via Skype. Click the button below